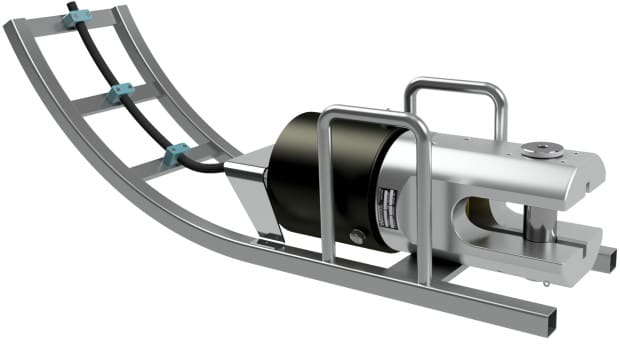 Incidents of girting are the tug’s response to unexpected and sudden movements by the tanker. Once in difficulties, every second counts if a capsize is to be avoided. Tugs often rely on rapid tow line pay-out by the rope winch to prevent a capsize. In the event that this doesn’t solve the problem, and the tug either doesn’t or can’t cut the line, the Webtool emergency cutter allows the mooring master to take the initiative and disconnect the tow line.

Ahead of single point mooring (SPM) offloading, the Webtool deck mounted cutter is deployed to the tanker. This consists of two portable units. These are a cutter (and reeled hydraulic hose) and the hydraulic power source. The cutter is mounted on a skid frame and positioned on the poop deck. Furthermore, the cutter also has the towing line in the cutter’s jaw in preparation for the emergency cut.

The cutter’s hydraulic hose is paid out to the power source positioned at a safe distance from the cutter. From here the mooring master is ready and able to activate the towing line cut. This is usually in the event of the tug getting into difficulties. The cut towline, still attached to the tug, then drops to the seabed away from the tanker.

“The Webtool deck mounted cutter is the final resort if all else fails,” says Colin Schroder, Managing Director. “By positioning the emergency cutter on the tanker, it allows the mooring master to release the tug, safe in the knowledge that the cut is instant and complete.”

To find out more information on the Webtool range of cutters and emergency tow rope cutters, please call 01254 615100 or email us at info@allspeeds.co.uk. You can also contact us here using our form and our friendly team will be in touch. Alternatively, you can also connect with us on Facebook. We would be happy to help with any questions of the OCIMF MEG4!