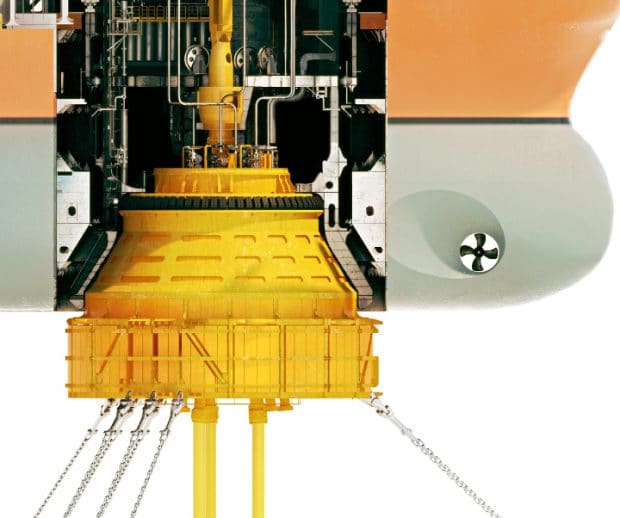 Webtool wire cutters have played a key role in the mooring of Shell’s Prelude, the world’s largest FLNG for storing and processing liquefied natural gas (LNG), off the coast of Australia. 64 Webtool hydraulic cutters, installed over three years ago, were successfully activated to release the buoy’s chain connectors to complete the vessel mooring.

The Prelude FLNG is moored using the SBM Offshore turret buoy mooring system, comprising 16 chain mooring lines at a water depth of 250m. Each mooring line passes through a chain connector mounted on the base of the buoy; this is a large tube with a ratchet mechanism at the top. When the chain is pulled from the seabed into the tube, it locks into place, permanently mooring the vessel.

Deploying the Webtool cutters subsea for three years was a significant engineering challenge, notes Keith Elliot, Engineering Director, Allspeeds. “Our cutters are normally designed for deployment subsea as needed. To meet the project’s longer term subsea deployment requirements, each cutter was constructed from super duplex and the blade cavity filled with wax and then sealed using a liquid elastomer seal. It worked perfectly.”

“The Webtool cutters were activated by handpump from topside and performed exactly as designed, allowing the chain connectors to be released and the mooring to proceed smoothly,” said Keith Elliot, engineering director, Allspeeds Ltd.

Webtool wire cutters are part of the Webtool range of high performance cutting tools, designed and manufactured in the UK exclusively by Allspeeds Ltd.