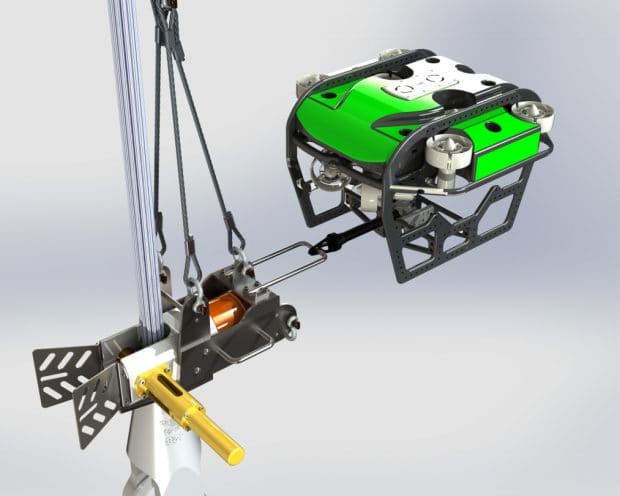 Webtool hydraulic cutting technology has been used to decommission the world’s longest floating bridge, Seattle Washington’s SR 520 Evergreen Point Floating Bridge. The cutter allowed the bridge’s 31 pontoons anchor cables to be removed without the need for divers. It also significantly speeded up removal of the anchor cables.

First opened in 1963, the 2,310m long concrete pontoon across Lake Washington, connected Medina with the Montlake/Union Bay district of Seattle. Unable to accommodate the increasing volumes of traffic crossing the lake, it has been replaced by a larger SR 520 floating bridge.

The main contractor Kiewit-General-Manson (KGM), a Joint-Venture, wished to avoid the use of divers in water depths up to 100m. Webtool suggested using an off-the-shelf hydraulic, guillotine action, cutting tool with custom brackets. This allowed the cutter to be suspended from a winch on a barge, clamped onto the anchor cables at the water surface, and lowered down the length of the cable to the bottom of the lake where the cables were anchored. The cutter was activated from the surface, severing the anchor cables, and leaving nothing exposed from the lake bottom except the anchor’s eyebar.

In total 58, a combination of 2 inch and 2-3/16 inch diameter galvanized structural bridge strand anchor cables, tensioned to 60 tons (534kN), were cut using the Webtool. The longest anchor cable was 163m and the shortest 52m. The KGM decommissioning team cut and spooled a total length of 8,156m cable.

Using the Webtool cable cutter brought significant project advantages. Kiewit demolition engineer, Eric Schwem, commented, “I wouldn’t have tackled the anchor cables any other way – the Webtool saved us thousands in the end. We were cutting and spooling four cables in a standard shift, where I would have been lucky to complete two with a diver – and at significant risk. I highly recommend the Webtool hydraulic cutter, we never even had to replace a blade!”

The Webtool range of high performance cutting tools is designed and manufactured exclusively by Allspeeds Ltd.