You are here: Home / News / Tangye: How it all began 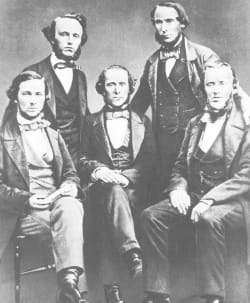 Our Tangye product has seen a rise in demand recently and we thought that we would take our customers back in time to where it all began:
The story begins nearly two centuries ago with the Tangye brothers; James Joseph, Edward, Richard and George. Cornwall, their birthplace, had been the centre of mining since the Roman times. All the brothers were born and raised in Illogan, the two eldest brothers were keen on engineering, as boys they had made working models of engines. James became a wheelwright and Joseph a blacksmith. The Two youngest brothers continued with their education, James went on to be a clerk and George a book-keeper whilst Edward went to America.

During the 1850s the brothers relocated to Birmingham and in 1856 James, Joseph and Richard set up the family business. The experience James gained as a wheelwright helped build the family business which foundations were solely built on hydraulic engineering. The single room on Mount Street was the first premises for James Tangye and Bros. The five brothers were working side by side and it did not take them long to get their first break.

The Tangye brand was growing and becoming very popular, in 1862 James Tangye’s Hydraulic Jack was patented. It enables one man to lift 60 tons which completely knocked the competition out of the water as existing equipment only enabled 4 men to lift 20 tons. By 1871 their catalogue boasted 515 different products. Tangye’s reputation was built on innovation and craftsmanship; the brother’s prided themselves on not taking trade from other manufactures but creating new inventions and adaptations not previously known.
15 years after the business started, Tangye’s hydraulic jacks won gold medals at international exhibitions and were present in world-wide markets. The brothers now employed over 1,000 people and in the time before the NHS and free education, the brothers provided their workforce with medical assistance and adult education classes.

Wagon Tipper from the 1867 Catalogue

Given the brother’s abilities and their work ethic, no wonder they created such a great business that is still fully functional today and still possesses the same foundations that the Tangye brothers implemented nearly two centuries ago.