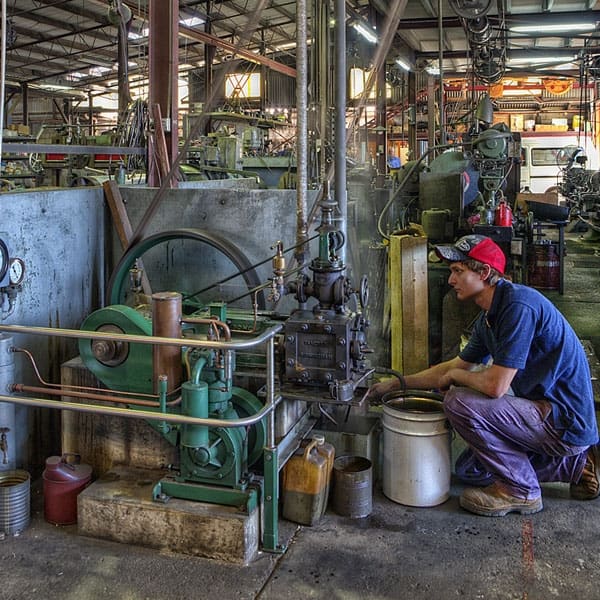 In the 1800’s the Tangye brothers, James, Joseph, Edward, Richard and George, relocated from Cornwall to Birmingham. From a young age the eldest of the brothers had a passion for engineering, James became a wheelwright and Joseph a blacksmith. Six years later James, Richard and Joseph created the family business. The experience James gained as a wheelwright excelled the hydraulic engineering business. The dedicated brothers worked hard and it wasn’t long before the benefits became clear. The Tangye brand grew rapidly, and by 1871 their catalogue boasted 515 different products. Tangye’s reputation was built on innovation and craftsmanship; the brothers prided themselves on not taking trade from other manufacturers, but creating new inventions and adaptations not previously known. In December 1912 the Tangye brothers supplied a Tangye Soho Steam Engine to Wilson Hart and Company located in Maryborough, Queensland, Australia. The engine spent its early years in a sawmill. The original purpose of the engine would have been driving small machinery. The last known task the engine performed for the sawmill company was driving the “sawdust extraction fan” in the mill. Information cast on the side of the frame indicates that the engine supplied was a single cylinder 5” bore x 6” stroke. In addition to the design the Tangye Birmingham logo was also cast on the main frame in a predominant place. Records show that in the early nineteen hundreds, Tangye steam engines were available from 5” bore up to 12” bore. The 5” bore engine featured an output of 3 horse power, and the standard catalogue price was £25. Today the Tangye steam engine has pride of place at the Works of Olds Engineering in Maryborough Qld Australia. Running with minimal sound, the engine provides an alternative source of power to the electric motor which drives the main line shaft in the machine shop. The boiler which supplies the steam is fired with scrap timber and waste from the factory, and every Thursday the engine is fired up and used to power the machine shop. The fact that the steam engine is still running after 100 years is a testament to the Tangye brother’s innovative design and excellent engineering capabilities. The Tangye brand is still very much alive, although the steam engines, pumps etc are no longer manufactured, the Tangye lightweight hydraulic jacks and pumps are manufactured by Allspeeds Ltd in Lancashire. Allspeeds maintain the same engineering capabilities and standards that the brothers had insisted on all those years ago, and are the only manufacturer of the Tangye range of products. Allspeeds would like to thank Olds Engineering and Deguest photos for the detailed information and image provided, and we hope that the steam engine successfully continues to run for many years.